Light On The Sun

In Jyotish, the Sun represents intelligence, wit and humor. Said to be the face of Truth, the Sun is the cause of light, and the source of life. In our charts, the Sun shows our divinity, our dharma, our soul.

The Sun: Source of Light, Giver of Life

“I know that great being who has the effulgence of the Sun beyond darkness. Only knowing him can one go beyond death.” ~ Yajur Veda

Worship of the Sun is “the oldest form of religion, as religion itself is a seeking of the light.”  ~ Dr. David Frawley

The Sun is our manifestation of the cosmic or universal light. All the planets shine with the reflected light of the Sun.

A well-placed Sun in your chart will give warmth, leadership, character and self-confidence.

The Sun In Our Solar System

The center of our solar system, and bound to it by gravity, the planets Mercury, Venus, Earth, Mars, Jupiter, Saturn, as well as Uranus and Neptune, dwarf planets such as Pluto, dozens of moons and millions of asteroids, comets and meteoroidsrotate around this blinding ball of light and fire.

Timelapse of The Sun

The Sun Through The Signs

The Sun in Aries

The Sun in Taurus

The Sun in Gemini

The Sun in Cancer

The Sun in Leo

The Sun in Virgo

The Sun in Libra

The Sun in Scorpio

The Sun in Sagittarius

The Sun in Capricorn

The Sun in Aquarius

The Sun in Pisces

Where Is The Sun Activating You

The Sun Through The Houses

Wherever The Sun is in your chart, by house, shows what you think about, your curiosity to learn, and the interests of your self-expression.

Working With The Sun

“The main thing is to establish a sense of self-identity according to our
inner nature as pure consciousness.”
~ Vamadeva Shastri

Cultivate a relationship with Mercury with the planetary mantra:
OM Hrim Suryaya Namaha!

The Sun’s color is red, orange, gold, yellow. His day is Sunday.

The primary gem for Surya is Ruby, to be worn on the ring finger of the right hand. Alternatively, a good quality garnet can also be worn around the neck. Before wearing gems one should consult a Jyotishi, as wearing the wrong gem can produce unfavorable results. 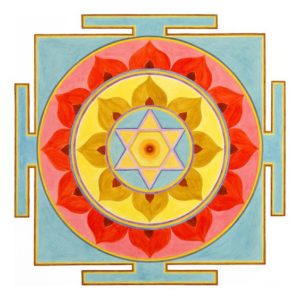 The Sun Yantra by Sandra Pintaric

Peering Into The Stars

“I’m still reveling in the joy of my Jyotish session with you – it was very illuminating, inspiring and reassuring. Thank you so much!“

“You have such warmth, wisdom and a radiant energy, it’s so joyful and contagious.“

“Laura’s poetic way of explaining ‘the mystery’ blew my mind, like a conversation with my very essence. Thank you Laura, your gift is divine!“

“It was like she was looking into my soul. It was truly beautiful, my heart was bursting with love and gratitude to be alive.”